Some of you may already know that for antivaxers the center of the vaccine universe is the Centers for Disease Control (CDC) in Atlanta, Georgia, USA.  The mothership of the pro-vaccine movement is ACIP or the Advisory Committee on Immunization Practices. Led by Dr Amanda Cohn, of the CDC, this committee makes the official recommendations on vaccine practices to the US Government.

This week, antivaxers descended on the ACIP meeting, as part of a coordinated effort called Inundate the CDC ACIP meetings. Apparently, they believe if they attend these meetings and wake up the ACIP “sheeple,” then all will be well in the world. A lot of very active antivax mums (and one guy) attended.

ETA: Here is one of the videos I watched of their testimony. 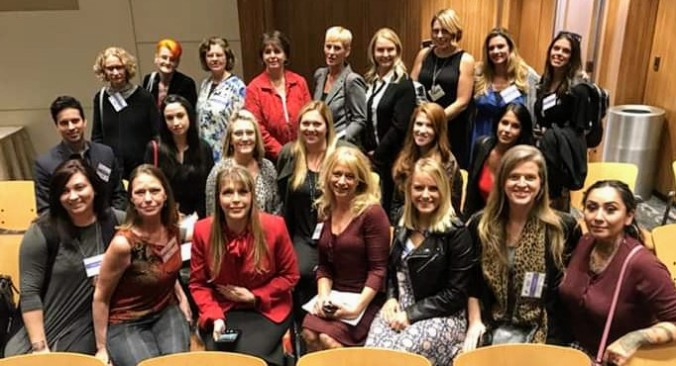 So, what did they want? They wanted to tell their stories and ask questions, only ACIP members don’t answer questions during public comment periods. So, what did they say? Well, I watched the video on the Inundate Facebook page and here is what they said:

Susie Corgan, in the sleeveless black dress in back, who is on the board of Informed Choice Washington, spoke about how her son is autistic because of vaccines. Except vaccines don’t cause autism. She asked if the ACIP members are listening to their stories?  My question is why would they listen to something irrational?

Tia Severina also has a son with autism and a daughter on the autism spectrum. She does not believe the rise in autism is due to better diagnosis. She is the mom in the red jacket in front. She believes the bad science in books saying that vaccines cause autism.  She believes genetics cause 1% of autism and the rest is environmental. She believes the vaccine safety studies are missing. She believes the cherry picking.

Next up was Teresa Berg from Michigan. She claims that we, as a society, accept ADHD, autism, ASD, speech delays, cancer, and or as normal. I am not sure where she got this idea. She believes vaccines cause all these childhood issues and doctors ignore vaccine reactions. She believes because there are no safety studies on the entire schedule then vaccines cannot possibly be safe. But there are many safety studies.

LeeAnne Johnson has two “severely autistic little boys.”  One of her children has seizures and the other has GI spasms. Of course, these can be comorbid with autism but they are not symptoms of autism. However, she believes these symptoms  are all vaccine injuries and it is “very unfair.”  She believes her children’s case is exactly like Hanna Poling‘s case and should have been compensated by Vaccine Court.

Jaclyn Gallion, of Washington State, spoke about how suicides are related to unvaccinated children who are excluded from outbreaks due to being unvaccinated. She claims that when children are quarantined they become depressed and attempt suicide.  This is really a stretch.  When you turn in a vaccine exemption form, you read that your child will be excluded during an outbreak. So, it is your responsibility, as a parent, to make sure your excluded child is cared for during the quarantine at home.  Really, her point is completely irrational. She wants us to expose unvaccinated children to outbreaks because it might help their self-esteem to not have to stay home? Good lord.

Erin Marie RN (Erin Olszewski) came from Florida feels ACIP should protect our country as their number one priority.  She was very teary when explaining that she was speaking for vaccine injured who have parents who could not attend this meeting. Her son, at 12 months, regressed into autism after MMR.  She believes ACIP is not helping people, that vaccines are not helping people.

I wonder what we can do, as a society, to help these women understand regression can happen with genetic disorders. I believe these moms need support and we need to advocate for families who are suffering while trying to help a disabled child.  If we truly supported them, perhaps they would not be so angry and blaming vaccines?

Lori Ciminelli, a retired medical assistant, spoke about how, in her time, children only got 6 vaccines and now her grandchildren get 72. (Sidebar: I am forever unsure why antivaxers think protecting children from more serious diseases is a bad thing. Also, they are very bad at math as children do not get 72 shots.) She also made some appalling statements about adults with severe needs. She asked why were there no adults in diapers in the malls when she was a child?  Well, Lori, there were few malls when you were a child and the special needs adults were in institutions. Nobody took them on day trips. They were warehoused like cattle. She also asked why there was no special education in her childhood. Well, Lori, special education laws were first enacted in the USA in 1975, that is why.  Before then, no one with any special needs was afforded any rights. Your child who had reading trouble, was failing math, was fitchety and getting sent to the Principal’s office a lot?  None of them were treated with any consideration. Your child who could not keep up with the class?  He repeated the grade or was kicked out of school. Prior to 1975, the schools did not have to teach anyone who could not keep up with their peers. 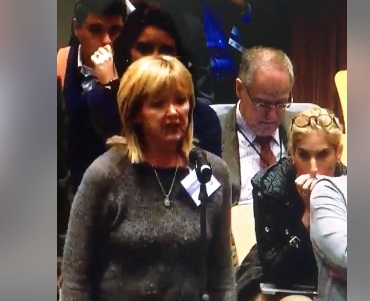 Hillary Simpson, the #crazymothers, believes vaccine injury can be healed without pharmaceuticals. Note that she believes her son was injured by rotavirus vaccine. She asked a few questions. 1. Who thinks it is okay to recommend 72 doses of vaccines without doing a single cumulative study? 2. Who thinks it is okay to not do a vaccinated versus unvaccinated study so they can assess risk? 3. Who thinks it is okay that 54% of our children are suffering from a chronic illness? And 1 in 36 is autistic. 4. What are you, ACIP, doing to protect the children and the vaccine-induced autism epidemic? (note:  Hillary is a former actress and remarkably dramatic) 5. When is ACIP going to start working towards resolution of this massive problem? (big sigh from her) 6. And when are they going to stop hiding behind “we don’t know why?”  Because the #crazymothers know and they are healing their babies.

LeeAnne Anita spoke last, in my viewing. She started off with a quote from Dr Paul Offit about how one cannot really say that MMR causes autism (my take: because that is not the way science speaks) but you should get used to saying that MMR does not cause autism because otherwise, people hear a door being left open when there should not be a door left open. What Dr Offit means by this is telling people the evidence does not support vaccines as causing evidence is confusing to the average person. So, instead of say vaccines do not cause autism.  It is more simple and gets to the point. But, she believes the door has been busted open because only thimerosal has been studied in relation to autism and only MMR has been studied. So, she believes vaccines could still cause autism. She does not understand why aluminum adjuvants are used as a placebo, why hep b is given to babies, why inserts say no safety studies have been done on pregnant women, and why recommendations for vaccines are only based on pharma studies. (of course, that is completely false). She wants an immediate change to the vaccine schedule and believes that Robert Kennedy Jr is correct, as quoted in the JB Handley book, that there is fraud at the CDC.

Another thing that happened this week, in conjunction with this meeting,  is this group approached Dr Paul Offit and somehow convinced him to have lunch with them, off the record. I am shocked he did this but proud of him for making an attempt to hear their concerns. 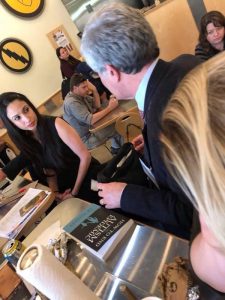 Of course, they could not resist mocking him afterward and being nasty. They really don’t have any self-control.  During LeeAnn’s testimony, when she was quoting Dr Offit, he was caught on video a “shoot me now” gesture towards his head. #crazymother Hillary, and the others took offense. 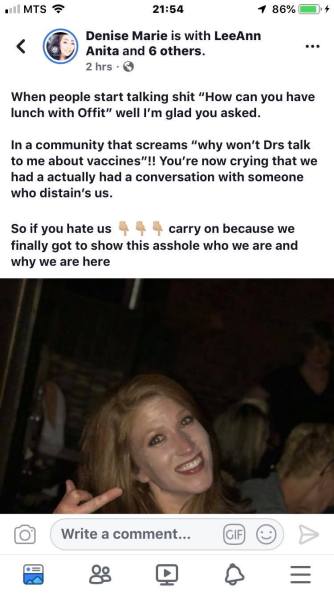 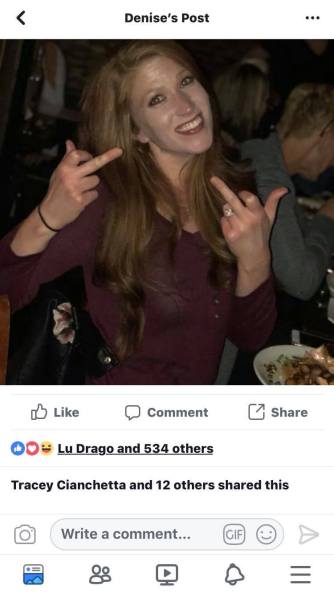 It was fascinating reading all their comments to each other, all over Facebook. They eventually recognized that it is likely their testimony did nothing at all to sway the committee but they hope parents will hear them and stop vaccinating. They believe the science is on their side and all provaxers are bought by pharma. It is really quite fascinating to observe them from afar. I am quite glad I was not there in person.

UPDATE: You can find all the videos to watch here.

Remember to think for yourself! Vaccines do not cause autism.